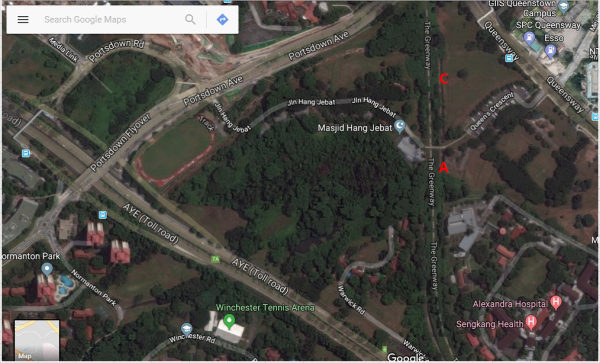 (This post was updated on 14Apr2022 with mention of a new book on the subject by Stuart Lloyd at the Notes section.)

I have often wondered about the locations of the massacres that occurred at Alexandra Hospital on 14/15 February 1942.  We know many were massacred inside the hospital.  But what about the 200 or so who met their fate outside?  “The Matter of a Massacre” by Peter Bruton is a book detailing these events and dedicated to his late uncle CPL John Bruton and other fellow victims of the massacre.  The following 2 diagrams and excerpts are from his book and with the help of the diagrams and descriptions, I will reveal what I believe to be 2 railway drain culvert crossings (A and C) near the hospital shown in his book.

pg10. In the early afternoon of Saturday, 14th at about 1pm the first Japanese troops were sighted from an upstairs veranda…

Thirty minutes later (by 3.30pm) more than two hundred men were assembled, taken out of the hospital… The prisoners were then taken through a drain tunnel under the railway embankment… to the Ayer Rajah Road then to a range of buildings a quarter of a mile from the hospital and set about fifty yards back from the road…

The buildings to which the main body of prisoners had been taken were the servants’ part of the old hospital Sister’s Quarters – a red brick two-storied house part set above the ground on piles.  A small courtyard was formed by a row of outhouses.  This outbuilding, built of more flimsy brick than the Quarters, contained three small rooms of varying sizes, the largest 10’x 12′, the smallest, 9’x9′.  Each room had double doors opening on to the courtyard and a window looking on to the Ayer Rajah Road and railway line. The last room in the building had steps leading up to the door of the quarters. Situated at the top of these steps was a Japanese machine gun position with another at the corner of the house, covering the road and beyond as far as the railway embankment. Along the roadside was a monsoon or “storm” drain overgrown with foliage.

Between 2 and 3pm…British shells… began to land around the building again.  One blew open the doors and window shutters… Several prisoners were wounded by the falling debris or shrapnel but those who were able made a dash for freedom… A number managed to get clear of the building but most were shot down by machine gun fire at short range.

2) “The Matter of a Massacre : Alexandra Hospital Singapore 14th/15th February 1942” by Peter Bruton

3) The following is a very well researched blog site that includes information about the massacre.  It was set up Jan Beranek who writes :  “I have set up this dedicated blog site to document and capture my search for my great uncle Silvestr Nemec. He fought and died in the battle of Singapore, serving as a volunteer and private under the SSVF.”

4) The book “A Bleeding Slaughterhouse” by Stuart Lloyd is a new book published in 2021 and is the most comprehensive account of the incident to date. The official website of the book is at : https://www.catmatdog.com/ableedingslaughterhouse

I like to go for walks and take photos with my mobile phone. Hopefully these blog posts will inspire you to see that you don't need to go abroad and spend a bomb for an interesting time. There is beauty, interesting scenery, amazing history and lessons to be learnt... sometimes hidden in plain sight. Please feel free to share your own walks and discoveries by commenting. View all posts by amazingwalks

This is a text widget. The Text Widget allows you to add text or HTML to your sidebar. You can use a text widget to display text, links, images, HTML, or a combination of these. Edit them in the Widget section of the Customizer.
Loading Comments...
%d bloggers like this: